Blayney Shire Local & Family History Group Inc.
MANDURAMA
The Mandurama Farm of Thomas Icely Sr. was listed as a colonial town in 1829. A police constable was stationed there in 1835 due to its position close to southern parts of the district. The settlement remained as a small outpost until the discovery of gold on the nearby Belubula River in 1870. With the influx of miners into the area, Thomas Icely Jr. created his own town to service the needs of the fortune seekers, bringing in a surveyor to plan the village late in 1875. The streets were named after metals and fruits. A Post Office opened in 1876, followed by a school in 1877. At the height of the gold boom ten hotels were located in the village, with stores, butchers, bakers, restaurants, blacksmiths, tent makers, and other businesses including several barber’s shops. Mandurama’s fortunes declined when the gold ran out. 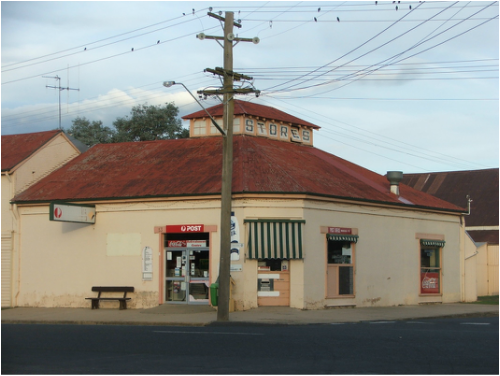