Blayney Shire Local & Family History Group Inc.
NEVILLE
The village of Neville has variously been called Number One; Number One Swamp; Mount Macquarie or Macquarie, by which name it was declared a village in 1880. In 1891, however, it was re-named Neville, after the parish in which it is located. Settlers were living in the area during the 1840s when bushrangers were becoming active in the district. Members of Ben Hall’s gang were familiar faces around its streets. A school teacher was appointed at the end of 1858, with a permanent school opened in 1869. In 1899 it was reported in the “Bathurst Free Press & Mining Journal” that Neville could boast a public house, three churches, public school, post office and two or three small stores. The Uniting Church, formerly Methodist, is the only church still holding regular services. 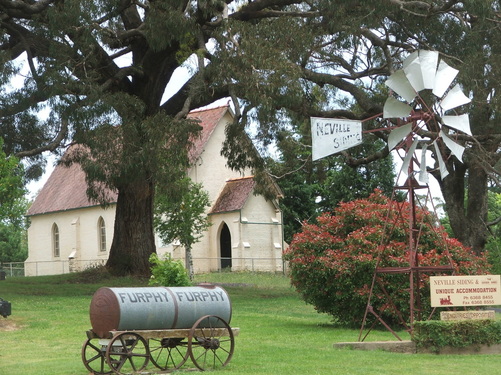