Blayney Shire Local & Family History Group Inc.
BARRY
Prior to its formal survey, the village was known as Five Islands. It was established on an intersection with roads leading to other settlements to the east and south of Blayney. A school was erected by local subscription in 1862. The 1886 Parish Map of the village bore a new name - Barry. As all streets in the village, except one, had their origins in the surnames of 19th century Church of England bishops in New South Wales, it is likely that the village was named after Bishop Alfred Barry who was Bishop of Sydney from 1884-1889. During the 1890s building lots in the village were offered for sale, and two small churches, clad in corrugated iron, were erected – St. James’ Church of England and St. Therese’ Roman Catholic Church (pictured.) Only the former is now used for worship. In its heyday the village also had a store, overlooking the crossroads, a post office and other businesses. 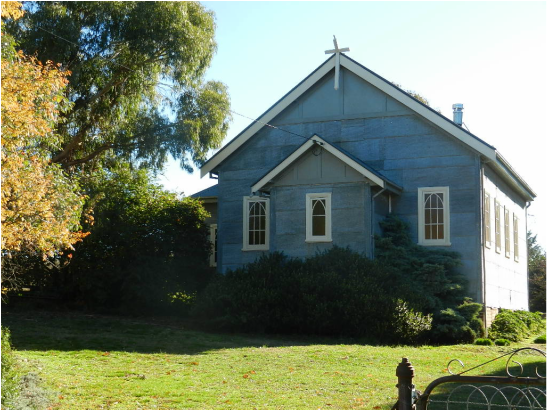